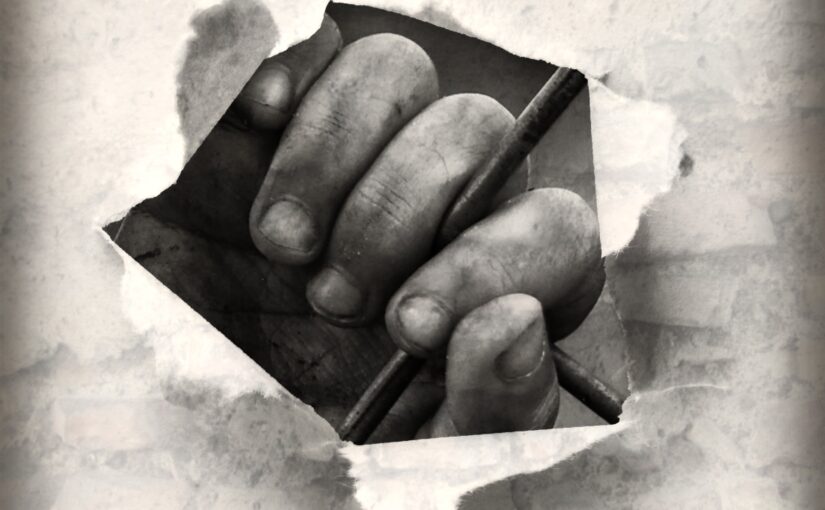 Most of the children I met and worked with came from Pakistan, Bangladesh, Afghanistan, Algeria, Morocco and to a lesser extent from Syria, Iraq, Turkey, Iran, Somalia, Guinea, Congo, Egypt, and Eritrea.

Many things can be said about the reasons these children left their families and countries, the reasons they were arrested, or details about the legal framework and the bureaucracy procedures.

I choose to focus elsewhere.

Detention facilities are a special place. It is a narrow, closed, dark place, with very limited space. You cannot see outside. Your gaze, also limited, cannot reach far. Dirty walls, covered with paintings and words most of which incomprehensible, foreign, written by strangers. Street sounds cannot be heard. Your ear gets used to human sounds, foreign languages, foreign accents. Foreign voices and cries… foreign, yet so familiar. And this smell… In here you cannot smell the rain, the soil, the exhaust, the flowers, a meal, or a perfume. Foreign smell… Foreign bodies from afar that were found here, in this place. Hands touching the walls, eyes seeking solace in them… Souls painting dreams, feelings, and thoughts…

Prison is the here and now of children’s lives but also of our work with them. What is a prison? The purpose of imprisonment is punitive. There is no “hospitable” prison, even though it is called “hospitality center”. The purpose of punishment is to “to protect society as a whole and to prevent other citizens from committing crime through intimidation” (Tsalikoglou, F., 2011). But children often ask: “Me no steal, me no bad boy!  Me no kill. Why me in prison?”.

Depreciation, bullying, verbal violence, threats of injury, and injuries themselves are commonplace in detention centers. Prison is therefore, by definition, a violent and abusive environment. Control, domination, isolation, and intimidation as forms of abuse affect all prisoners.

The (harsh) reality of imprisonment, combined with the language barrier, makes every intervention particularly difficult and every effort seems futile. So, what is the role of a psychologist in such a context? What kind of intervention can he/she make? What is the proper attitude during the arrest, during the first contact with the prisoners, during uprisings, or when suicide attempts are made? How can we get in touch with a person that speaks a different language? How can we regain our dignity and freedom in a violent and unfree environment?

In detention centers, the psychologist is confronted with his/her inability to change anything about beneficiary’s life. He/she cannot control or restrict violence, he/she cannot change detention program, and most of the time verbal communication with the beneficiaries is very limited, due to language.

I will try, though, to describe what he/she can do through the narration of a real incident:

S. is in custody for 2 months. He is 15 years old and he is a Kurd, from Iraq. When he came, he did not know a single Greek word. He now understands few words, but his inmates with whom he was able to communicate in Kurdish (he does not speak another language), were released. He walks slowly and sits in the edge of the bench. He does not look at me steadily, and when our eyes meet, his expression remains the same. I notice that his hand is burnt. I was informed earlier about this incident from a police officer who did not know more details. I ask S. about it. When it did happen? How did it happen? He starts talking with his eyes fixed on the floor and he looks around now and then.

He speaks Kurdish. He seems to explain. I cannot understand him, and he probably cannot understand what I am asking either. I do pantomime and I am trying to find out more information. He answers and he tries to show me what happened. During his effort he uses scattered Greek words such as “he” and “not know”. What I have understood so far, is that he is talking about the fact that many detainers were released, that he was burnt by water and that at some point he was cleaning…

So far, I am not sure if and how this information is relevant. I try to understand. I get tired. I look at him and he looks back at me. Is he trying to understand too? I do not know what he says, I do not know what he wants to say, I do not know what his story is. But I can see that he is trying, that he would like to know. I see that he wants to come closer, that he needs something, although his way may be different and our contact very difficult. But isn’t it exactly what happens in every therapy session? And what about me? I have so many questions. Did he injure himself? How did this happen? Is he in danger? I am probably worried. Yes, I am. And I want to approach him.

I get up from my chair and I sit next to him, leaving some distance between us. I notice that I am sitting in the same position as he is. I keep this position; I think that this may put me in his shoes. I rest my hand on the gap that separates us. He probably understands the invitation. He moves his body right next to me. He does not speak anymore. The gap that separates us is not there anymore. His body slightly touches mine. He wants to get away. I spread my hand around his shoulder and hug him. He cries. I am moved. I rest my hand on his back and I feel his breath, I realize that it is becomes deeper and calmer.